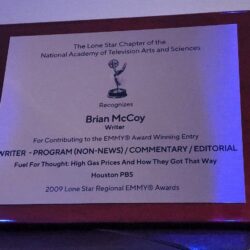 The first #TV production project that I was a part of in Houston, TX was for #PBS. After I arrived, I emailed a producer at the local station and she immediately responded, “Come on in.” The release of the primary documentary that I was a part of was postponed since its topic was about the oil crisis that Read more about B. McCoy receives Lone Star Emmy Awards plaque[…]