I had the opportunity to manage the production of this campaign video against racial profiling with Truxton Creative in Washington, DC. The shoot was held at the historic Thurgood Marshall Center YMCA gymnasium, Sept. 2014. People from all backgrounds and ethnicities took part in the production, taking a full day to get this 1:50 minute finished product. The NAACP has been working on racial profiling for years, from Trayvon’s Law to pushing for the End Racial Profiling Act, this has been at the forefront of the Association’s work. Get more information about this work here.

Both of these “laws” include the body cam policy, enacting citizen’s review boards, federal guidance on police militarization and police sensitivity training, things that have been pushed as a result of the Ferguson, MO Darren Wilson shooting that killed unarmed teenager Michael Brown.  This video is a part of a larger campaign that seeks for people to share their racial profiling story online using the hashtag #BornSuspect, putting an everyday face to the horrible practice. Check it out and share it to put an end to racial profiling.

The social media campaign included a series of memes that shared the details of the issue and increased engagement across platforms. 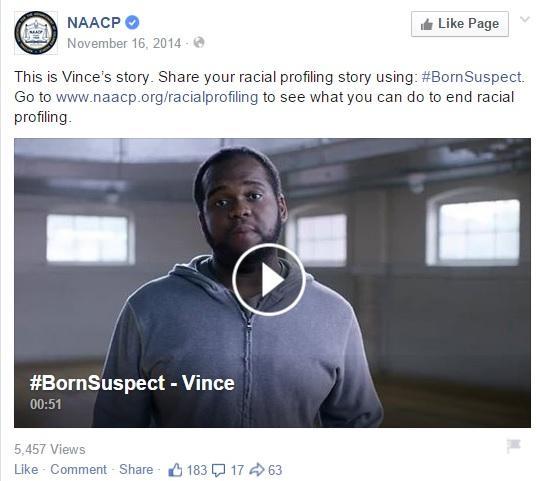